Are you planning to buy a new computer monitor? You may be looking for a larger display with higher resolution and better response time, but you’re missing something very essential. The contrast ratio is the feature you should necessarily consider if wanting to experience outstanding visuals.

The contrast ratio is defined as the ratio of the brightest white to the other extreme that is the darkest black. The more the ratio, the deeper the visuals. If you see somewhere in the specs of a monitor that it contains a 1000:1 contrast ratio, you should know what it indicates. It means the white image’s full brightness is better than its black image’s brightness up to 1000 times. If you go for a display with 100,000:1, it will provide you with more explicit dark pictures with fine details. The displays with higher contrast ratios are far better than the monitors having a lower ratio.

The less contrast ratio results in a dull image, while the higher ratio produces visuals as you are viewing it from your naked eye. The higher contrast ratio presents every color as more vibrant, sharp, and deeper, and the visuals seem stunningly attractive. There is a massive difference between the white and black colors, and both look more eye-catchy.

As it is expressed in ratio and no official or standard method is available to explain the contrast ratio, organizations provide their own measures. That’s why you can’t compare the contrast ratios provided by different manufacturers for comparing their products’ performances.

Why One Should Go for Higher Contrast Ratio

The higher contrast ratio enables the monitor to display every color with precision. The images appear richer, more vivid, and more impressive. The interesting thing is that every detail appears on your screen in a noticeable way. Even the shadows and highlights are too prominent that it seems real.

If you are using a monitor for video or photo editing, playing games, and watching movies, the high contrast ratio is of utmost importance. The applications working at detecting brightness and color differences can get benefit from this feature.

Static contrast is also known as native contrast. In this procedure, there is a comparison of the darkest part with the brightest one. For measuring ratio, a simple course of action is taken. The darkest black portion and the brightest white part of an image are compared to measure the static contrast. There is no modification of any parameter when measuring the ratio. This contrast is true and provides the exact ratio of a particular monitor but many brands don’t mention it in the specs.

The other method of measuring contrast ratio is dynamic contrast. Unlike static contrast, in this method, modification is done in the parameters for individual colors. The settings of the display for white color are changed by raising them high to the maximum level. For the black color, modifications are done, and it is decreased to the minimum level.

The ratio measured by this method is not reliable, and different brands show varying contrast ratios. The higher brands even don’t mention the contrast ratio because they don’t want to ruin their reputation by showing inaccurate figures.

For measuring contrast ratio, there are different techniques that brands use according to their ease. These methods are as follows:

The full-on/off technique is easy to use but provides misleading figures. Many industries use this procedure due to its convenient manipulation. In this method, a full-white display is compared with a totally black screen. The measures that got through the full-on/off approach are unrealistic and not entirely accurate.

b- Half Screen Slides

Half-screen slides are a technique in which a half-white screen is compared with a half-black screen.   This procedure is relatively better than the full-on/off method because it comes with few accurate figures than the above one. But still, you can’t rely on it.

In this method, the small slides of the display are measured as compared to larger ones. This method is also not that faultless because uniformity is not up to the mark.

It is a very simple procedure in which a checkerboard is used that has 16 rectangles. 8 rectangles are white, while the rest of the 8 are black. The brightness values of both white and black rectangles are measured and, later on, averaged to get the right figures.

It is a huge issue for new monitor users that they don’t know what matters the most when looking for a new monitor. When someone tells them the importance of contrast ratio, they get busy searching for a monitor with a higher contrast ratio. But the interesting thing is that it is not the sole feature to focus on when searching for a quality monitor. It is essential to remember that contrast ratio is no doubt a feature that makes the monitor present outclass detailed visuals. But you can’t solely rely on it for displaying a full-color spectrum.

When we talk about the specs of a computer monitor, nobody can deny the importance of the contrast ratio. The contrast ratio is the ratio of a display’s brightest white to the darkest black that it produces. There is no fixed procedure to measure the contrast ratio of a monitor that’s why the ratio mentioned by a brand may be a misleading figure. Though it is a crucial aspect to focus on you should consider other features also at the time of buying a new one. Otherwise, you will always be annoyed by the image quality of your monitor. 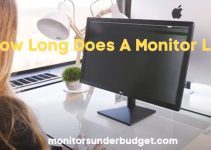